Brecha: A castle in the Austrian Alps is teaching sustainability lessons to tourists
By Robert Brecha

What can a castle in the Austrian Alps contribute to a conversation about sustainability? I found out recently during a family gathering sponsored by my father-in-law. My wife’s family has known Ernst and Gerlinde Schrempf, the owners of the Schloss (Castle) Thannegg-Moosheim, for decades. I actually had been there many years ago.

What I had not known was how deeply engaged Ernst has been in considering environmental sustainability when renovating the hotel and restaurant from the ruin it was in the 1980s. And now that his life’s work is basically complete and running well, he is entering retirement and dedicating his time to environmental activism.

He led the effort for his Austrian community to be the first to declare a climate change emergency, a stance recently enshrined in legislation by the Austrian government.

When they began renovating the 12th century castle in 1985, Ernst thought about efficiency – not so easy with thick medieval stone walls. He figured out how to insulate the building while maintaining (and restoring) the original aesthetics. The heating system was changed from fuel-oil boilers to a very energy-efficient groundwater-sourced electric heat pump.

The heating is through a radiant floor (and wall) system, which has the added bonus of supplying nearly-free cooling in the summer – an increasing necessity due to rapid warming in the Alps. He said the measures he took reduced the heating-energy load by about 75 percent.

Ernst has an electric car and an electric scooter, and guests can charge their electric vehicles for free. He plans to replace his seven-passenger van with an electric version. And did I mention that they serve very good food as well?

Other activities include Monday lectures on his work in the castle, climate change and renewable energy (as well as about his hair-raising expeditions climbing to the tops of evergreens to harvest cones used to make a traditional brandy), and taking guests on guided ski tours in the winter to see the disappearing glaciers.

Students at a Japanese university did a study of the hotel, and evaluated the motivations of guests for staying there. About two-thirds said the environmental orientation of the hotel was an important factor in their choice, and roughly one-third claimed sustainability considerations were the key deciding factor for them.
Ernst is convinced he is on the right track. He shakes his head at the highly-indebted large new hotels in the area heated with expensive oil, for which he sees no future, and only further financial pains for his colleagues.

He tries to balance the contradiction of having guests add to their carbon footprints by coming on vacation to his region, but he buys carbon offsets to work, imperfectly, to make up for that. It is fascinating to spend time with a person in an unusual place who is making action on climate change work for his business. He’s a real evangelist for the need to act on the climate crisis. 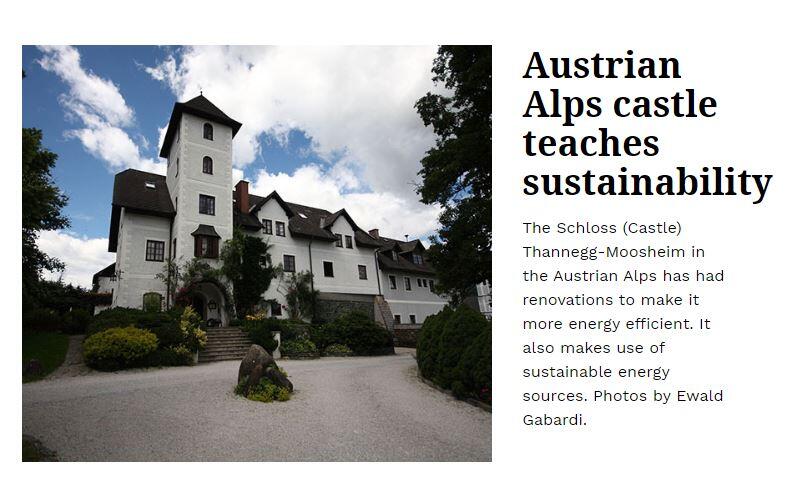